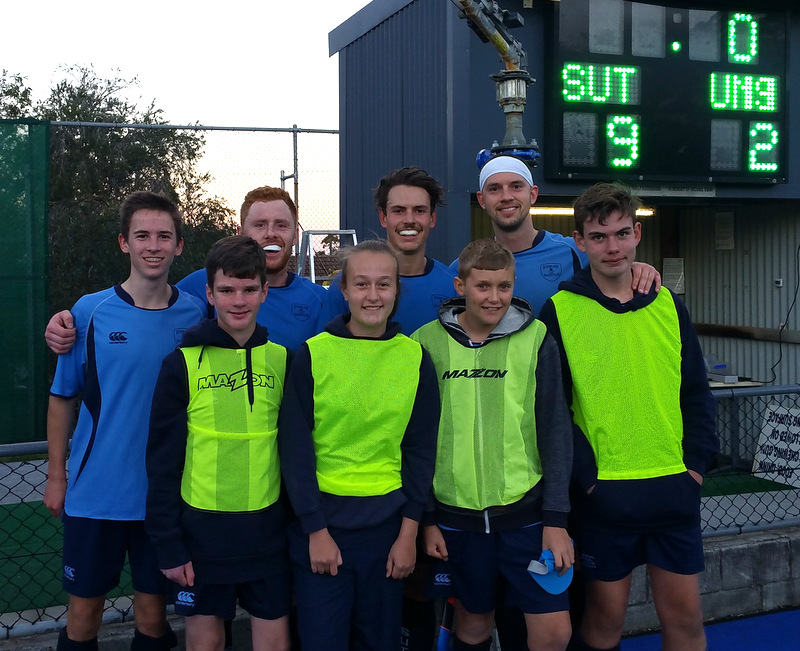 Our hard working ball-kids didn’t have the holiday weekend off when they patrolled the sidelines for the Sutho-Sydney Uni first grade game. Thanks to Nick, Mackenzie, Jack and Kai for their contribution and to Matt Morris for the picture.

This week our match reporters, apart from a hardy few, must have been bedridden by the lurgie going around, the holiday bug, writer’s block or to be posh: mid-season ennui. Thanks to those who made the effort. All our juniors have the school holidays break, so they have two weeks off from match reporting.

Sutho first grade women came up against St George on a cold Saturday afternoon at Moorebank, starting slowly and showing too much patience and not enough tenacity.

The second half saw us put a bit of grunt into our passing and forcing outcomes and we came away with a 4-0 win.

On reflection we have to have confidence in our skills and be ruthless – especially when we are down players and Ruth-less (#RuthSannes #CaptainsAwayWeStillPlay #BlueOnTheOutsideOrangeOnTheInside).

It was a wild and windy day for this week’s game at Kyeemagh. Wildcats were struggling again this week with players out and injured. Thanks again To Kayla for filling in.

Wildcats have been in good form for the last few rounds. We were hoping to continue the form against UNSW who are currently sitting 2nd bottom on the table, but we were not quite awake and UNSW scored first.

This woke us up a bit and we lifted our game. Wildcats went on to score 3 quick goals for a half time score of 3-1.

Although we had the wind behind us in the second half the forwards were not connecting well with the ball or each other. The defenders kept us in the game and the fast UNSW forwards out of the circle.

Wildcats eventually created a few opportunities up front and were unlucky not to score another couple of goals. Not our best game but we were happy to take the win and remain at the top of the table.

With both teams down seven players with injuries or playing in U’21 National championships the game was still high quality and fast.

Sutho played some real good team hockey which showed what they could do and particularly so with the team work displayed by Benny and Harry: between them they scored 7 goals.

Benny has certainly got his mojo back in the goal scoring area as he has done for so many past seasons and has scored 6 plus goals in the last three games.

A new face on the scene is Harry Roberts, who shone in general play with some great passes and general work rate and is really coming of age at  only 17 years of age.  To boot, he scored 4 goals and is growing in confidence at this level each game he plays.

We play our next game on the 21st at home against NWS.  This is a Back to Sutho day and hopefully will bring a number of old members back for the show.

We also hope to field our full 1st grade squad with the exception of Jonno Scott, Luke Noblett & Cam Parsons, the latter two out for the rest of the season with injuries.

A frantic start to the game, with end-to-end hockey. Mistakes led to Sutho being down 2 -0. Sutho made a hard fought comeback, getting back to 2-2, before again conceding.

Final score saw Sutho lose 3-2, which was made to look a lot more respectable, due to a great display in the net by Damon Arapa.

Overall, while the team fought hard, our basics were just not good enough. Back to training this week to prepare for our very important match up against Briars.

Back up against our main rival in this year’s Sydney League 2 competition, all five Rowlings gathered for a group photo before the match.

The team got off to a good start, dominating possession in the midfield and creating good opportunities through smart passing.

But without any goals to show for our hard work, we got punished on defensive short corners, conceding four of the five goals in this way.

We got strong goals by Matt, who flicked it over the keeper after a sweeping save, and Dave who was positioned perfectly for a slap hit in.

Unsurprisingly, with all the Rowlings on the field some were bound to run into trouble, with Bob receiving a green card and Lachie a yellow!

The final score of 5-2 loss was a reverse of the first encounter. Overall, tighter marking in defence to defeat the long through ball will serve us well going into our next match against Ryde, likely to be during the finals.

This game is always going to be a tough one and it certainly proved to be.

We played some very good hockey right from the start which is good for us and for long time we had most of the ball but just before half time Uni scored.

Half time talk was gentle, sympathetic, encouraging, calm but forceful as throughout the first half we played very well.

Second half started the same and we continue to play well but were unable to move the ball up to the forwards so they could do their bit. Eventually Uni scored another 2 making it 3-0.

A good performance all round and thanks again to Rory for standing in.

Our juniors are enjoying the winter school holidays break.